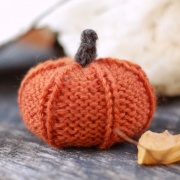 I was able to combine another two of my loves today:  knitting and pumpkins.  I actually have a pumpkin board on Pinterest to collect all things pumpkin.  For me pumpkins mark the beginning of Fall (no matter how hot the weather is :-)) and all the comforts that come with the Autumn season.  And it means that Starbuck’s starts offering their Pumpkin Spice Lattes!

I saw this little guy a while ago on The Sitting Tree’s blog and just had to give it a go.  The pattern called for knitting with DPN’s (double pointed needles) and I shared a few days ago how I don’t like using them because they’re so fiddly, so I changed to the Magic Loop technique of knitting in the round and it worked out great. 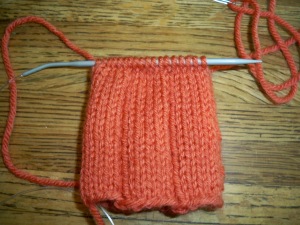 I found this orange-rust yarn in my stash and it knit up beautifully.  The pattern called for size 4 needles, but I only had size 5.  Ordinarily I wouldn’t recommend being cavalier with the needle size because it can adjust the finished size of your object, but in this case I wasn’t too worried; it’s only a pumpkin, not a sweater. 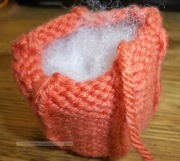 I knit for 3 inches and then cinched up the bottom part, stuffed with fiberfill, closed the top and drew the yarn tail through the bottom to create the pumpkin effect.  The pattern finished with instructions to make the stem using the i-cord technique, but I chose to just crochet a quick little stem and tie it on.  It was so fast to knit up that I’m working away on pumpkin #2.  I think I might knit up a family of pumpkins and display them on my mantel.  I’ll share a photo in a few days. 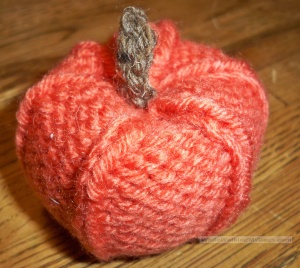 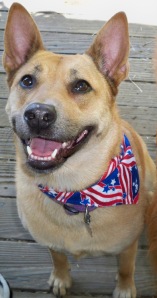 “Did I vote?  You bet I did!  I voted ‘yes’ on longer walks, more treats and more being allowed to chase squirrels and ‘no’ on vet visits and baths.”