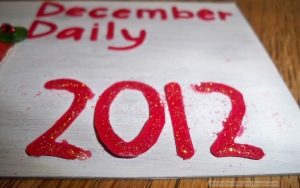 Yesterday I posted about setting up my December Daily album to capture my memories of the month of December.

Today I worked on the cover.  On the whole I’m happy, but I think it’s missing something.  I will set it aside for a bit and maybe the inspiration will come as the month progresses. 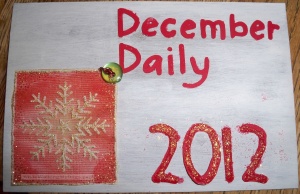 Let me show you what I did.  First I die-cut the words and numbers “December Daily 2012″ using my Silhouette Cameo.  I then found some cardboard (I think it was formally a cereal box), cut two pieces 4″X6” and painted them both white with acrylic paint.  After the paint dried I adhered the letters and numbers, then covered the numbers with Diamond Glaze dimensional adhesive and red glitter.  The Diamond Glaze gives the numbers an embossed look and the glitter just jazzes everything up.  I then found a piece of red and gold ribbon with a snowflake, glued that down and then placed a button in the corner.  This is what I have so far, but I know it needs something else.  Maybe some stitching around the edges.  I’ll keep working on it throughout the month and share with you when I have it all completed. 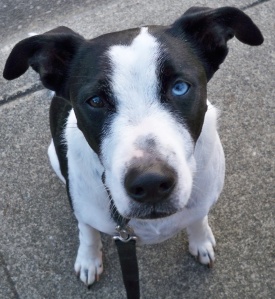 “I know exactly what your album cover is missing.  A dog paw!  And I know just the dogs that can help you with that.”